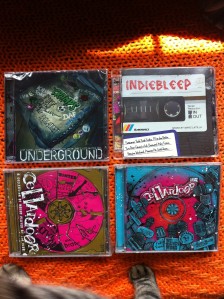 I put all the albums I’ve compiled and released together for a little photo shoot. There is one more for 2012 coming at the end of October (70s Kicks) and another two planned for 2013 (4AD and Indiebleep 2).

They’re snapshots of another time and place. Very proud of them. Madam F did all the design except for Indiebleep which was done by Mark at Red Flag