REFORM! started in Nov 2009 with Charles Leonard and Marc Latilla. It’s a regular party held at KITCHENERS in Braamfontein (or wherever…) where we play a 6 decade spanning selection of soul*raregroove*girlgroups*townshipjive*reggae*swingjazz*nigeria70s*vintagedisco*wave*springbokradiohits*indie*rarities*oddities

The seeds of REFORM came from a combination of some old Junction tapes I compiled some years back and a book called ‘Last night a DJ saved my life’.

The magic of the Junction was being able to play wildly different music almost back to back like it belonged. Nowhere else could you hear 10CC, Doobie Brothers, Alien Sex Fiend, and Marianne Faithfull in that order and all this back in 1989.

The book traces the history of the DJ from the beginnings of the phonograph record and radio right up to the superstars of today. What interested me was the middle bit being the story of Jimmy Saville and his early tea room romps, the Northern Soul story, and the mish-mash that was the 70’s and early 80’s.

Going through the setlists of the different clubs and their infamous DJs I felt like a philistine only recognising less than a third of the tracks. So I hit the music and blog sites trying to find as much as I could. What I found was mind-bending. How could some of these tracks have evaded me for so long? (besides the fact that I was 3 when all this was going down…) What struck me again was the Junction principle where these DJs played seemingly unrelated music back to back…Clash into Grandmaster Funk into Rolling Stones into Manu Dibango into Blondie into Iron Butterfly. There was also a strong African influence across the lists, especially Nigerian funk/pop. This got me thinking.

With the combined force of Charles Leonard – respected journalist and DJ – it could be done.

I remember sitting for hours on end at Abelarde Sanctuary in Brixton and early Tokyo Star listening to Charles play his eclectic mix of soul/jazz/funk/hip-hop and reggae. We’d both have to make some adjustments, but we’d be the perfect match to pull this off.

Law of averages says:
There were probably parties like this in Johannesburg in the 70s/80s and they were probably raided and closed down (mixing black and white folks and their music was a big no-no back in apartheid-era SA). It’s so much easier these days.

The only question was: would anyone come?

**people did come. About 50 showed up for the opening night. That was good enough for us to carry on.

Join this blog for updates or contact mail marc@johannesburg1912.com for more info

Besides our regular nights, we play our REFORM! sounds at other like-minded parties, corporate and private parties. 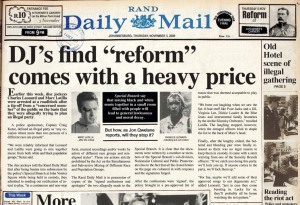 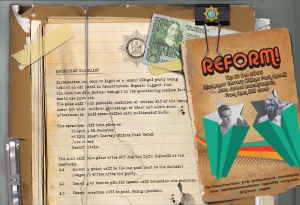