Check out the next installment of my old Johannesburg suburb by suburb research on Jeppestown & Belgravia for my 1912 story.

Of interest are these pictures I found in the Africana Museum Archives showing tram lines running under the train lines (when they were still on street level). Grand Central Hotel, also famously known as Norman’s Grill, is in the background. Today, the tram lines are gone and the train lines run underground. This whole picture seems like it’s from another city. It’s probably from around the mid-1930s as the construction to lower the train tracks appears to have started around 1936 and completed just before WW2 (the street level crossings around Jeppe Station caused major traffic upsets and accidents).

Trams eventually went out of commission in March 1961 and it took a number of years before all remnants of the tram system were removed from the streets. I recall the overhead electric tram lines in Clarendon Place Hillbrow still being up in the late 1980s. 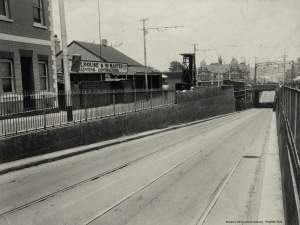 Here is the same picture from a slightly different angle on the other side of the road showing the Jeppe Post Office on the right (which still stands today along with Grand Central Hotel from the first picture). Note the tram lines on street level. Not sure where the cars were supposed to drive… 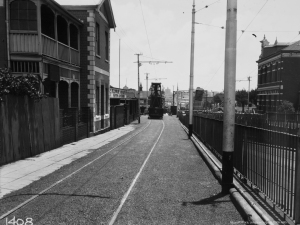 Check out my post on the history of trams here

← My DJ course as a free download
Kickstarter stuff arriving →