Our final kick for 2014 takes place at our regular hangout at Kitcheners in Juta Street in Braamfontein on Saturday 6 December 2014. We start easing in at 6pm in what is the probably the best time of year: that point when everything is starting to wind down, final touches to plans are being made, roads are becoming little emptier, people are a little friendlier and everyone is looking for an excuse to have party. 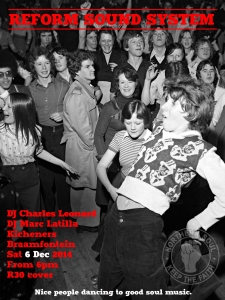